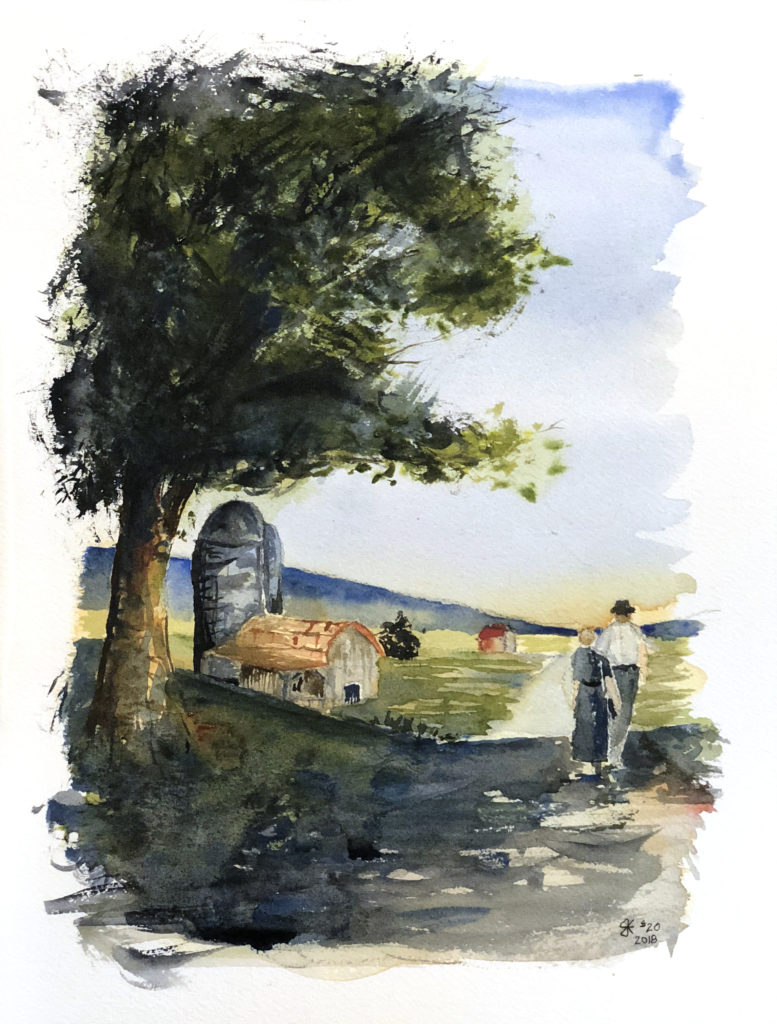 I really didn’t want to share this one, but it’s all part of this exercise, so…

I tried using the new squirrel quill for as much as possible on this one. I really like the way it adds movement because the soft hairs sort of do their own thing under pressure. But, I have to keep a careful eye on water, since it holds SOOOOO much. I like the shadows on the trunk of the tree, and the dress on the lady, but she needs a bonnet. (I need to mask that.) The background hill is too much of a single note, and overall, there isn’t enough value contrast. I’m going to try to fix that by adding some darker shadows in the foreground. It’ll probably ruin it more, but that’s ok. The silo looks like a giant blue penis-which is unfortunate. The distant house was where is gave up on the quill for detail work, I can get a hairline with it, but it takes a lot of control, which I don’t have just yet.

The farm house walls are 100% wrong. I tried getting too much detail in them. It’s like I can’t decide what the focus should be so I try making everything the focal point. That does not work. I should be less detailed, and more loose on the elements that aren’t the focus. I should think – give the impression of a barn – not color the barn with pigment.

The figures need more light on the female’s shoulder to separate her from the man. And the highlights on the dress should probably go away.

I tried to give the impression of a hill that tops off at the figure’s feet. To achieve this better I should increase the value contrast in the grasses. Make the foreground warmer, and the mud ground cooler.

I also didn’t keep a careful eye on the dampness of the paper – which made the pigments blend too quickly. As a result, instead of multiple tones, I got singular notes.

The shadows should be about eleventy thousand shades darker. (Update: I did go in and darken the shadows. The image here is with the darker shadows.)