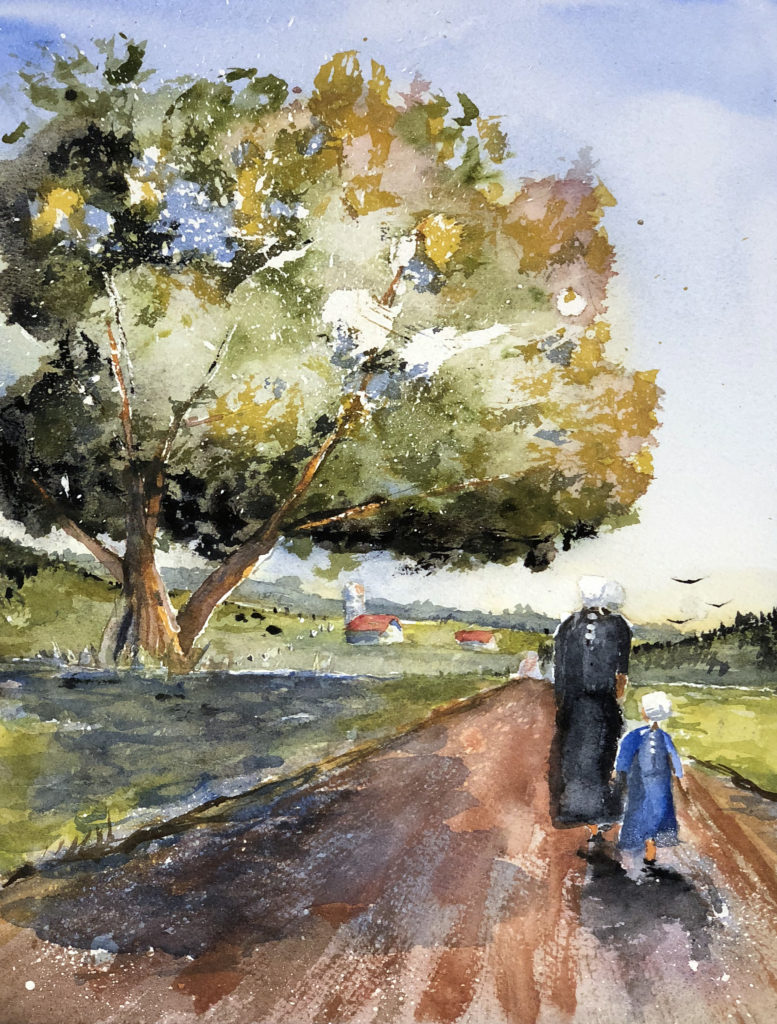 I tried something g a little different tonight. I sketched out the painting, then took a photo of the sketch, and used the markup feature on my phone to plan out the values before I started. Blue numbers represented cool tones, red colors represented warm tones. A 4 was supposed to be highly saturated, and a 1 was supposed to be very light. This was helpful with the first wash, and probably would have helped had I not lost sight of it during the secondary washes and final glazing. I’m going to try this again, but on a separate piece of tracing paper so it stays in front of me the whole time.

In this one, I like the houses, and the shape and texture of the tree. I like the way the distant trees contour the hills, and I even like the cow blobs. My favorite part is the girl’s bonnet.

I do not like the stride of the mother, or the glaring buttons. The shades on the dresses are muddy, and the road is far far far too saturated. I relied fairly heavily on masking fluid. This helped with the spray on the road and the tree, but hurt the figures. The pterodactyls in the background are a bit out of place. I like the color of the grasses, but the shadow of the tree is not dark enough – or too dark, I am not sure.

I like that the sky peeks through the tree, I’m going to try to make that happen again.

I also like the shoes, they would be helped immensely by better representing movement in the folds of the dresses. Overall, I was much too careful with the figures, and it makes them feel flat. I really have to learn to let mistakes lie – fixing them just breaks the value structure.

Here’s a photo with the Value Plan