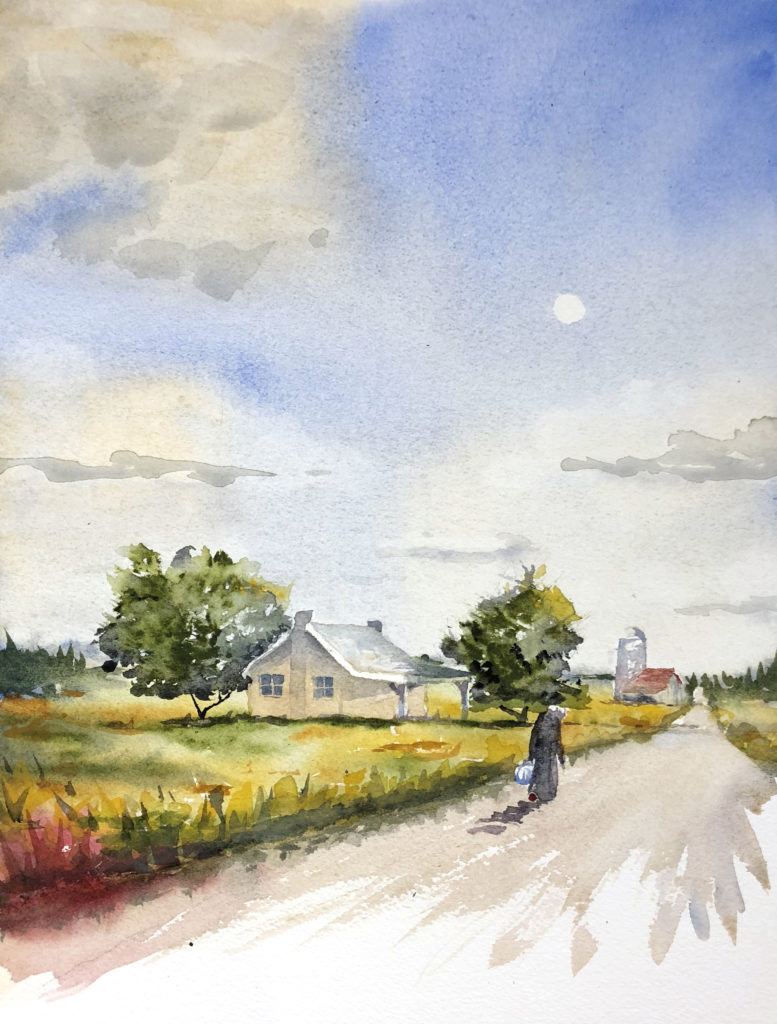 Tonight my primary goal was to not overwork anything. I almost achieved it – the roadside brush I think was overworked, as was the Amish Nazgul.

The sky I did the same as before trying to avoid backwash. I went back when it was dry to add shadows but didn’t soften the edges enough, so they look way too sharp.

I am happy with the grasses, I tried to let most of the primary wash remain unmolested, and added a few dry brush strokes for shadow and texture. I like how that worked.

The trees I started with thick Payne’s grey, and worked in some thick sap green and cerulean, letting them mix on the brush. When the shine was gone, I dabbed some cad yellow for highlights, but very reserved. That worked well. The left tree touched a cloud shadow that was still wet, I tried to blend out the mistake a bit, but stopped out of fear of overworking it.

The house came together well. I stopped trying to paint lines for siding, and I don’t think it needs it. I also tried to preserve whites for the gutters, and highlights on the posts, I think that worked well.

The road I nearly destroyed by adding blue pigment at the wrong time (just after the sheen was gone – the danger zone. I ended up washing it all over again and that seemed to correct the mistake.

The brush I tried to layer pigment to get it more dimensional, but it still feels flat.

The woman – whoa that went wrong. I wanted to keep white at the head for a bonnet, but the angle is all wrong. The dress is horribly proportioned, and the right arm is a frightening spear. I tried to bend her under the weight of the bag she is carrying, but she looks like a hunchback with giant terror fingers. Oops.

I’m not sure about the sun.

I like the distant barn. I tried to allow lost and found edges there and o think it works.

The distant trees are a bit too dreamy – not sure how to fix that other than to round them out so they look less like pines.

I like the highlights in the roadside brush – maybe the fence would make this feel more correct, I’ll try that tomorrow.

Tomorrow is my last draft before I try the real painting on the 31st attempt… we’ll see.