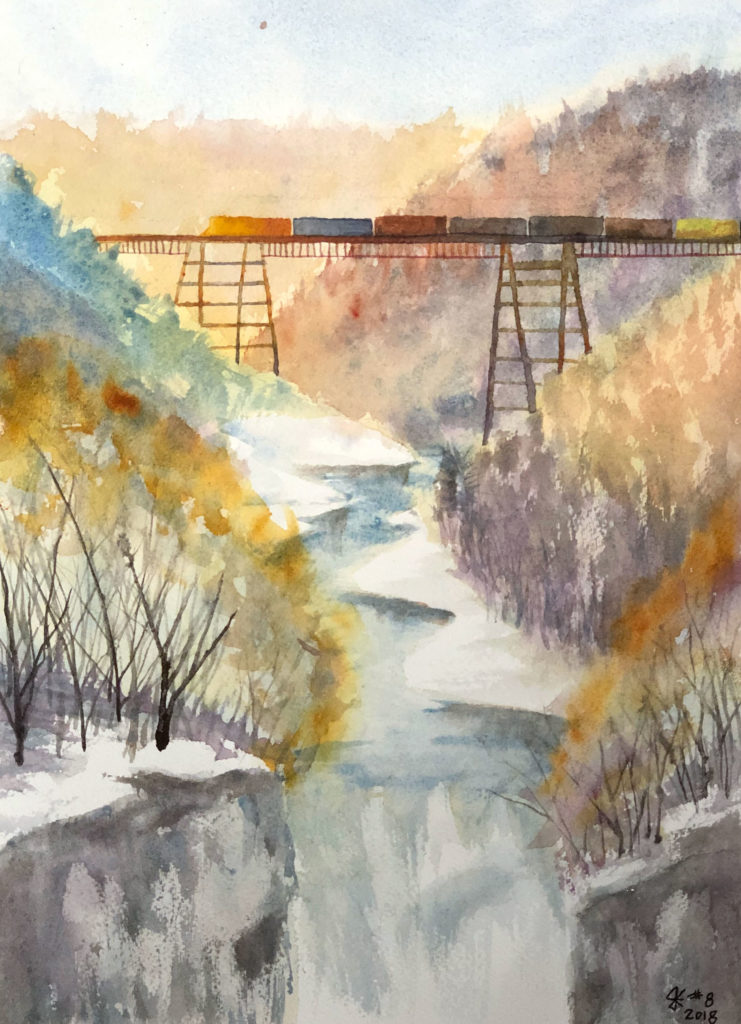 I wanted to see how far I could push creative coloring… this is too far for me.

I’m happy with the cliffs – which is funny because they have the least amount of colors.

I also like the waterfall. I tried this one with no masking fluid, and I think that helped me to be more disciplined with the washes.

I started by sketching this out on paper, first in pencil as a value study. I learned that I have been painting this with no real focal point. This time, I tried to make the bridge the focal point by reducing detail everywhere else. Unfortunately, I also decided to go ape shit with the colors, and any focus I was providing to the bridge is being shouted out by the rainbow vomit everywhere on the paper. 🌈

I want to get better at the halo effect I am playing with in the branches of the trees, I like it — but I have to be much more restrained with the application.

I like the effect I got on the nearest trees by pre-wetting the paper at the branches, and then painting trunks on the dry paper, and pulling up into the wet paper. There, the lines could blur and wander in the water giving the impression of branches. I started with grey trees, then painted strong dark trees with a full charge of Bloodstone. I want to experiment more with that.

The bridge was fun, I enjoyed letting the different colors blend with each other, and I think it does a nice job of communicating the light bouncing around on the metal. If I had been more restrained with my palette elsewhere, I think it would have made for a very interesting focal point.

As it is, I think I need to wave the white flag on this photo for now. I want to come back to this when I have a better understanding of things, but I have learned a whole lot from painting this. Most of all, I’ve learned a great deal about how you can give the impression of the directionality of light in a painting by being bold with the depth of the warms and cools in the sunlight and shadow. I also learned that snow needs color in order for it to have density. Without color, it is flat and lifeless, but with one stroke of blue or orange, it suddenly gains mass and interest.

I think that is something I need to get better at now, painting the mass of an object. It’s not enough to focus on value and color theory and general design principles, I need to also communicate a variety of weights in the objects. By providing a variety of masses, I can help structure the painting and will have one more tool in drawing the eye.

Right now, I think there are some major elements for a painting:

1) Composition – this is the most important part. The painting doesn’t need to be of a fascinating or awe-inspiring subject, it can be anything. But if the elements are not arranged in a pleasing way, then even if I do everything else right, the finished product won’t be successful. Good composition has a definite focal point, and interest elsewhere. It’s like a cast of characters. There needs to be a lead actor, or it’s more of an argument than a play. If there is a lead actor and no one else, then it’s a soliloquy, and that’s ok – even beautiful. But it isn’t a story.

In order for a composition to tell a story, I need a cast of characters. In the painting, that cast is composed of lines, values, colors, textures, and weight. Together, that cast needs to tell a story about the focal point, by providing drama – without trying to upstage the focal point. If the cast of characters is too weak, then they will feel trite, or flat, or shallow. If they are too strong, the composition will become a shouting match. The trick is to somehow develop a cast that is interesting, and multi-dimensional, but balanced as well.

Hmmm… now-how do I do that?

2) Light. Maybe this is the plot arc of the story. It’s not written out per se, but it’s defined by everything else. The cool tones here, warm tones there, atmosphere back there, and definition here – all come together to show where the light is, how it is behaving, and the effect it is having on everything in the composition. If I paint the light – then I’m providing a cliff’s notes version of the plot arc. Instead of letting the viewer look at the painting and discover the story the lighting can tell, I’m just saying – here is the light. It goes there. And the interest dies. I need to be more subtle in telling the story, otherwise I’m doing all the work for the viewer, and not letting the viewer discover the story for themselves. And I think it’s that act of discovery that makes a piece of artwork impactful.

3) Color. There needs to be two colors, otherwise I just have a blank piece of paper. But even if I only have two colors, I have a story. The more colors I have, the bigger my cast is – and the more difficult it will be to keep the focus on the main character. That’s not to say I can’t have a lot of colors – just that I need to keep in mind that every time a new color is introduced, it should have a purpose. It should contribute to the story in some way without becoming the story. Chekhov’s gun – right? If there’s a pistol on the wall in Act 1, it better go off in Act 2. Don’t put a color in my painting unless it’s going to “go off” somehow. But there’s another point to be made about Chekhov’s gun. If there’s a pistol on the wall in Act 1, it shouldn’t go off during every line of every scene. Use the gun to add tension, and drama, and (most importantly) resolution. It’s easy to understand how to do this with a story – put the gun there, and then kill somebody with it. But how do you achieve that with color? When you have one, static image, how do I use color to build tension, and resolution? I don’t know the answer to that – but I think there’s the rub.

4) Texture. Everything in the painting has texture-even if it’s just plain paper. Every brush stroke creates a texture, and every texture is a character. That means I have to be careful with the brush strokes. They too need to be supporting actors. It’s possible to have a trillion of them on stage (see Van Gogh) but they have to be working in harmony. They have to be working with one another instead of against one another. Likewise, a wash is a texture. The wash is like a supporting actor, and brush strokes are minor roles. If I cover the wash with brush strokes, I’ve crowded out a crucial character. But if I don’t have some supporting roles, then the story won’t be as richly told. (How far can I stretch this analogy? Let’s see…)

5. Value. One thing that I’m just now starting to realize is that every time I put paint down, I’m creating TWO values. The first is the value of the paint I’m applying to the page. Thick paint = dark value. Dark values are bossy as hell. That’s a good thing. I need dark values-I need a protagonist and an antagonist. But the thing I’m just now realizing is that when I lay down even the lightest value, it creates a second value, which is the contrast between the value I just applied, and the value that’s already on the paper. If I start with a plain sheet of paper, I guess I have one value – but in a way, I have no values. Because there is only one flat thing – there’s no contrast, there’s no tension, and I guess I have to wonder if there really is any value at all. Once I put even a single brush stroke down – I have two values. The stroke, and it’s contrast with the paper. If I put another stroke next to that one, then I have to match its value exactly (in which case I haven’t increased my cast of characters, I’ve just made that character more important) or I will have added another character to my story. Reducing the number of different values can simplify a painting, and dull the cacophony, but if I have too few values, then I won’t have much drama at all. I need to have a balance. The story needs conflict – or it’s boring as hell. (No offense to My Dinner with Andre.) Because dark values are so bossy, they quickly take over in providing conflict. If I polka-dot those value contrasts all over the composition, then it becomes difficult to see where the story starts and ends. If I am more purposeful with the value contrast, I can help to define the story, and provide a scaffold for the plot – which will eventually (hopefully) let the viewer discover the light.

Ok – phew! That might just be a bunch of malarkey, but… maybe if I think about things that way, it’ll help me in the next painting.