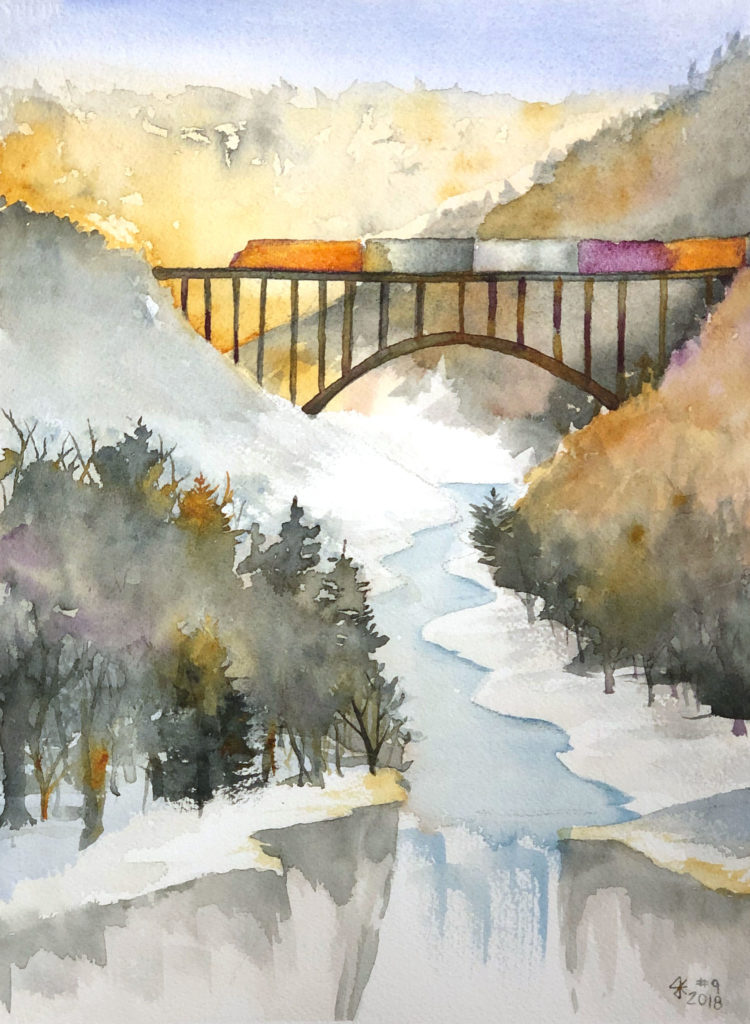 I woke up at 4 and couldn’t sleep, so I painted this.

I really wanted to capitalize on the lessons I have learned from this painting, and give it one more shot before throwing in the towel, and I think I nailed it. The only thing I don’t like is the curve of the bridge.

The biggest thing I focused on was trying to keep in mind that I wanted to tell a story about the light in the painting fighting against the shadows.

I knew from the other paintings that the action and textures in the cliffs and waterfall were fighting to upstage the bridge, so I slid them away.

I also knew I was cutting the composition directly in half, which felt very much like I was trying to use a sledge hammer to tell the story. Instead, I moved the composition so there would still be an equal amount of light and shadow, but instead of simply being on opposite sides of the painting, they are now in different corners. I think this helps to allow the viewer to discover the conflict, instead of me beating them over the head with it.

I tried to accomplish the lights by keeping a close eye on my cast of characters. I wanted a reduced color palette so I wouldn’t have too many characters to wrangle, so I laid down my washes in three colors, and kept some areas white.

For the light, I chose quin gold, the shadows were a slightly warm grey that I made by mixing quin gold, aquamarine violet, cobalt blue, French ultramarine blue, and sap green. The shadows were a very rich almost green grey which I was reasonably happy with.

I started laying in the grey, trying to see how it would glaze over the primary wash on the far hill. I wasn’t crazy about it – it felt dull and lifeless.

Then I painted that pine tree at the base of the river, but with a much darker value than I meant to use. That turned out to be a very happy accident, as I loved the way that dark dark pine tree cut into the light of the river. Something became unstuck, and I began laying the grey down in thick patches. Like I said, I was experimenting, I wanted to – you know… really explore the space.

Then I thought about my analogy of Chekhov’s gun, and decided to let it “go off” by dropping some quin gold into that shadow. It exploded and I loved it.

I started painting the trees on the near cliff. I dabbed some very deep shadows, and dabbed in a drop of quin gold and realized how much I liked that interaction.

As I continued, I realized that the grey was pretty one dimensional, and decided to try dropping some ultramarine purple here and there as the shadow’s Chekhov’s gun. I liked it and explored that some more.

When I was done there, I started on the bridge, really trying to get that quin gold to fight the purple through the grey. I like how that worked. I knew I didn’t want to overdo it, which was actually hard because I was enjoying it so much, so I decided to use a good amount of the grey in order to keep the conflict between those colors at bay.

The result is a painting I’m happy with, I’d give it an A-. Thanks