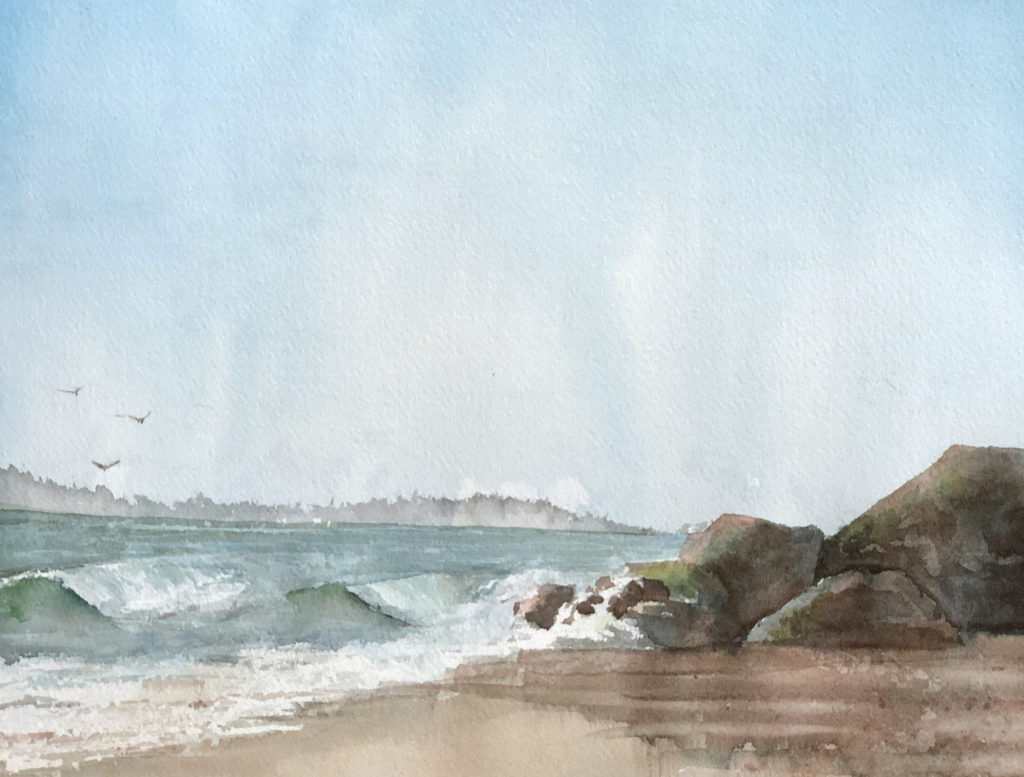 I screwed up on the perspective of the waves. But I like the colors overall.

At the horizon I knew I wanted to emphasize the amount of atmosphere between the viewer and the island in the background, without any atmosphere I know that island would be green. In order to make it look like there was a bunch of atmosphere between the viewer in the island, I needed to make the island look more blue. If I simply add blue to green, I get something that’s more vibrant blueish green. That’s not the color that I’m after because it makes the island appear closer than further away. So I thought why doesn’t a blue-green island look far away? Well i learned from MuralJoe that orange sunlight plus blue atmosphere, makes a brown/green turn blue-grey.so now i know the color i want to see, but how do i make it? I have a green island affected by Orange light, and a blue atmosphere. But I cant just mix orange blue and green, because I’ll get brown. Imstead, I have to mix compliments to get grey. According to Bruce, the compliment of Phthalo Blue is Burnt Sienna. By controlling the amount of burnt sienna that I add to the blue I can control how blue or brown the grey will be. I settled for something very neutral in order to make the island appear almost completely gray so that I could make it look like there was a lot of atmosphere between the viewer and the island.

The waves are a mess. I completely ignored the rule of halves and doubles, and as a result the Ocean looks like a junior high kid who doesn’t know how to brush his own hair.

The rocks I’m close to happy with. (More burnt Sienna, less Phthalo Blue) they still look a little flat to me, but I really like the green moss. I think that makes the sun appear to really be resting on the face of the rocks. I wanted to get green out of my Phthalo/Burnt Sienna grey. I now know adding green will make it more brown, so instead I added yellow to make it appear green. Víola! This Bruce MacEvoy thing is really helping.

The sand, I tried to add a reflection in an attempt to make the sand appear wet. This almost worked, but it looked too wet. So I dragged my brush perpendicular to the reflection hoping to get the sand to show under the reflection, but I went before the reflection had dried the right amount of time. That just moved the pigments and made a cloudy stripe. So I waited, and tried the palette knife, but that just made dark scratches (I had overworked the paper by then.) So I waited longer than I thought I had to, and THEN I dragged a bush of clean water, and that gave me the line I was looking for. (Though it was now surrounded by dark scratches and a cloudy stripe.)

The birds were masking fluid, and a tiny swipe of blue-grey.