Tonight, I painted the next exercise in Ray Hendershot’s book. I don’t know why Birch trees feel like a very trite subject to me – but they do. I think every painting of birch trees is essentially the same thing – masked off trunks with something colorful or dark behind them. 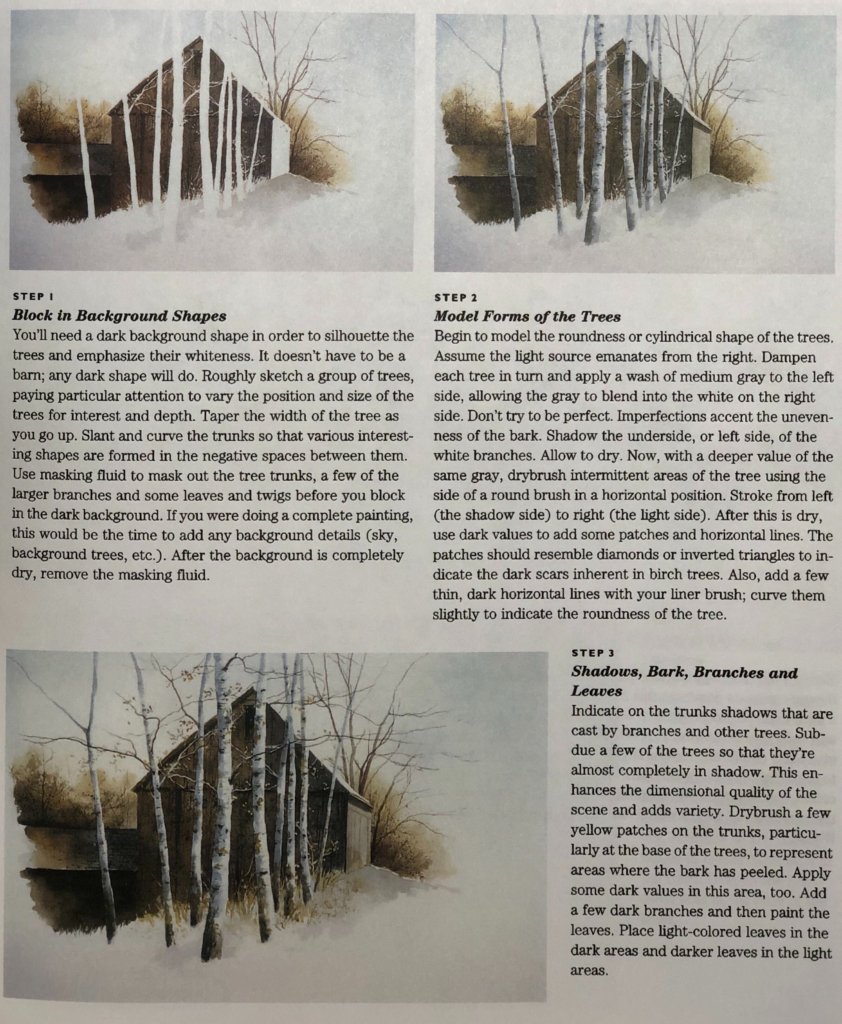 I think Ray Hendershot has some of the same feelings – but as he says, his collectors look for paintings of birch trees – so, why not paint some.

Like I said – these  start by masking off the trees, and painting the dark objects behind them. In this case, I was really happy with the attention to detail that I went with. I added details in a few places, but not many. The windows on the distant house are a good example. I took the time to paint individual panes of glass – but didn’t take the time to render them with exruciating attention to proportion and size. As a result, the eye gets the impression of panes of glass, but it doesn’t command our attention as much as the birch trees in the foregound. (Or at least, I hope they don’t.) If you look at them very carefully, you can see easily that they are just simple brush strokes – and there I think is where the real joy in viewing art comes in. The person looking at this painting might see this, and get the impression of a window there, and just walk away thinking “Neat.” or “I want a hot dog.” But sometimes, a viewer will look a little longer, and see those brush strokes. That person will quickly see that they were fooled into thinking it was a window, when in reality it’s just six brush strokes. Then, hopefully, they’ll think “Aha! Neat! Good trick. I want a hotdog.”

The hardest part for me on this one was knowing when to stop. The problem with painting a background while the foreground is masked is that you have to find a stopping point before you start on the focal point. Which means, I have to settle on exactly how much detail to include in the mid-ground. Too much detail, and I’ll never be able to pull the foreground into focus. Too little detail and it might not be apparent what is in the mid-ground and what is in the background. Without a foreground, midground, and background – the image will feel flat.

I think I did a reasonably good job of establishing those planes of detail by adding lines to suggest siding on the house, and rendering the windows with more detail.

The windows were actually one of the epiphany moments for me. I painted that house, completely wet – then dropped in some big splotches of dark value where the windows would be. When that dried, I painted dark colors in more careful shapes, leaving the center untouched. This gave me the result I got on the window in the lower-left, which I’m really proud of.

Finally, though I like the effect of the pine trees, I think they should be more out of focus. By keeping them so sharp-edged, they come to the foreground a bit, and it makes the depth of field feel a bit off. The dark tree behind the house on the left does the same thing. I should have blurred that a bit more in order to keep it behind the house.

All-in-all though, I’m pretty happy with this exercise. Another great exercise from Mr. Hendershot’s book.

This is also only the second painting I’ve ever done with snow… I should say – I love how the snow came out on this one. And that’s encouraging, because the book leaves the snow out entirely from his explanations. 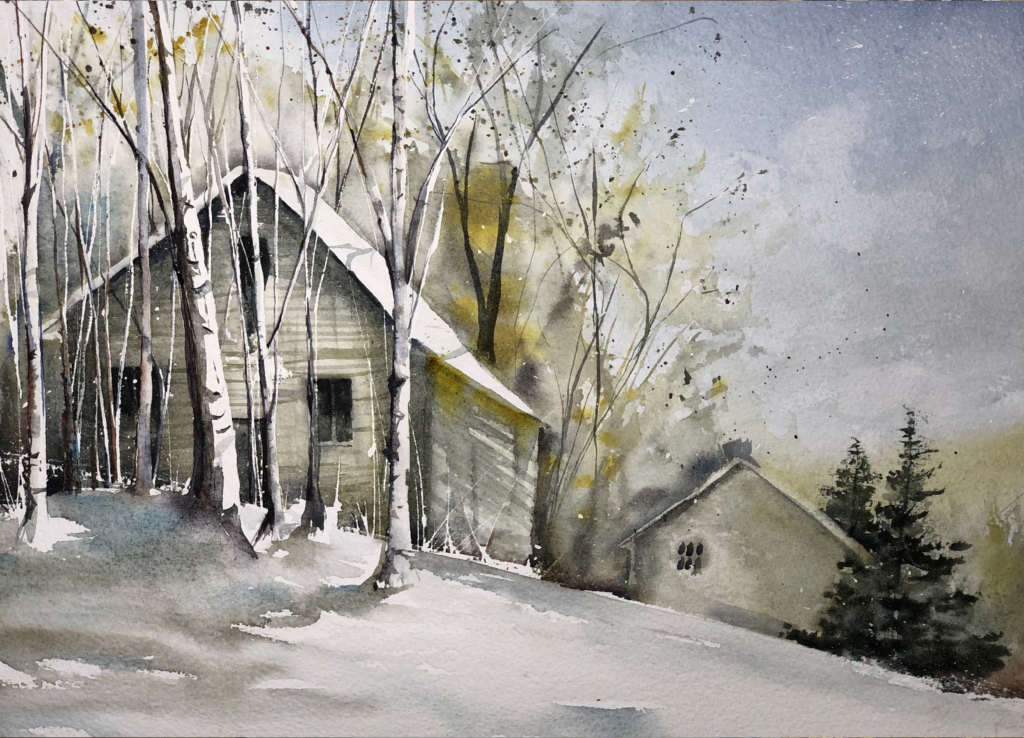