I purchased a book by Ray Hendershot entitled “Texture Techniques for Winning Watercolors.” 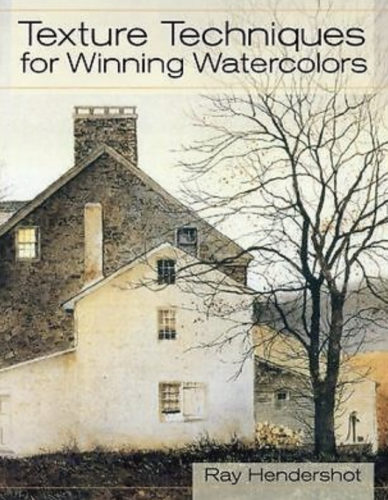 I appreciate how Mr. Hendershot manages to achieve the impression of a photorealistic image, but includes just enough Impressionism to give the composition a level of emotion that I feel photorealistic paintings often lack. (Steven Kozar does an excellent job of proving me wrong on this point.)

Mr. Hendershot’s paintings strike a balance that appeals to me, and I would like to try to improve in that direction.

The first exercise in the book deals with splatters, and spatters, and he goes into some standard methods for creating texture like lifting, knifing, masking, and salting. As he acknowledges, the book is not geared as an introductory book, so he doesn’t go into a ton of detail on these techniques, rather he gives suggestions such as, “Use more water on the brush,” “Try with more water on the paper,” “Try table salt and rock salt,” etc…

Once he has explained some of those basics he gets right into an exercise. The first exercise is painting distant trees.

While I failed miserably to reproduce his technique with any kind of accuracy, I decided to move on anyway because I didn’t want to get bored with the book. (I’m a bad example. I’m only on page ten, and I’ve skipped 90% of the exercises so far.)

The reason I failed on the distant trees exercise is because I was trying so hard to achieve his results, that I worked my attempts to death. I also allowed myself to wander and experiment as I tried the techniques he described.

While I didn’t get the results I was after, I do think this is how Mr. Hendershot intended the book to be used. He doesn’t seem interested in having the reader duplicate the examples, rather he provides the examples and progression photos, but only enough to introduce the ideas and important aspects of the technique. The reader is supposed to experiment with those on her own.

One off the big things I learned from the distant trees exercise is how subtle many of the texture effects are. The point isn’t to cover the page in dots and dazzle the viewer with details, rather the goal is to add some flavor to the painting. A few dots are highlights in one or two spots is all that’s needed, the viewer then will automatically create the details for the rest of the painting on his own.

Take “Working Late” as an example. Here it is again, look at the stones on the house. 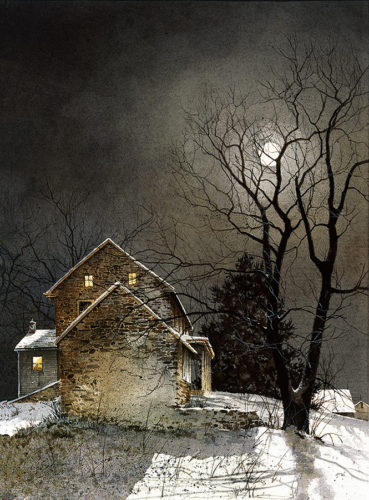 I don’t know about you, but at first (second, and third) glance it looks like he has rendered every stone on the house with exquisite detail. But, look again. Yes, individual stones have been painted, and he painted most of the stones you might see. But he didn’t bother shading them, or giving them texture, or working the grout between them. Each stone is really nothing more than one brush stroke. He masterfully leaves gaps between the stones, but they are far less detailed in reality than the mind perceives them to be. I think this is largely due to the splatters of paint in the foreground. Those splatters tell my eye, “there is a lot of texture in this painting.” Then, when I look at the stones, I invent texture on them in accordance with the texture created by the splatters in the foreground. If that same texture were to be applied to each stone, the result would have likely been overwhelming. Instead, he describes a rule in one place and leaves it to us to apply that rule throughout, and we don’t even realize we are doing it. It’s the the exact same thing that we do when reading, sure, all the letters are there, but we don’t sound out each letter, or even each word. Our mind sees the letters, knows what would it expects, and that’s what we read. We don’t sound out every word. Which is why we can read those passages that make their way around social media every two years, you know the one:

This same thing applies to art I think. We don’t have to paint every branch, and every leaf. We just have to paint a sufficient number of them in sufficient detail to tell the viewer how we would like them to imagine the remaining ones.

This might also be why I can be in awe of a painting, and then suddenly less impressed after watching it be created. The first time I see it, I experience all the details that my mind is inserting. When I watch an artist create it, I notice how the illusion of those details was made.

Maybe this is also why I can often be convinced that my own painting is awful while I’m in the middle of it. I see a billion missing details, a trillion absent highlights, and I think I must add more, otherwise the viewer will never know the light was there. But this couldn’t be farther from the truth. Adding each and every highlight will just force me to overwork the image.

When in doubt, leave it out.

I’ll get on to the next exercise in another painting, this went on far longer than I expected.

Anyway: here is the image from Mr, Hendershot’s book: 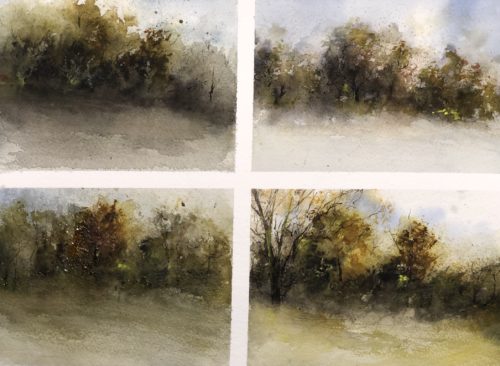 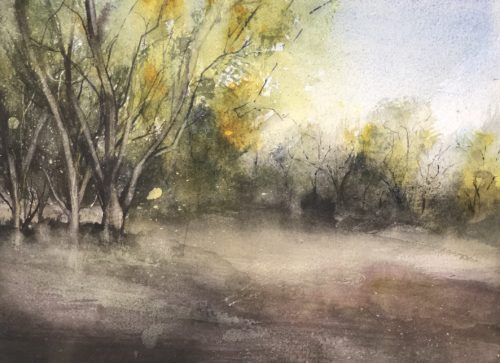 Ok, so clearly I didn’t achieve the results I was after. No worries. The question is why.

First: notice his sky. There is essentially nothing there. Instead of the blue of the sky, Mr. Hendershot has pained blue tree shapes in the distance. I read these as an indication of hazy cloudy sky, but in reality, they are distant trees. Regardless, the fact is I didn’t paint these in any attempts. I knew they were there, I recognized why they were there before I started, but for some reason, I couldn’t resist the urge paint a sky like I normally would. As a result, there is an extra layer of depth in Ray’s painting that’s missing from mine.

Finally, in terms of composition, his trees are clearly on a diagonal horizon, and roughly one thirds of the space is reserved for sky, one third for trees, and one third floor ground. In mine, even though I tried to make a diagonal horizon, I just slowly straightened it to level each time as I overworked the image. And, the trees grew taller and taller until they broke the frame almost every time. Both of these are just symptoms of overworking the image.

And, I overworked the image’s largely because I wasn’t getting the results I was after. Instead of letting it go, and allowing the painting to “be what it is” I tried to force it into something it wasn’t, and just ended up turning it into mud every time.