Yet another successful painting from Ray Hendershot’s “Texture Techniques for Winning Watercolors.” I was getting really down on myself recently because the paintings I was making were all turning out muddy and gross. This exercise helped me learn patience. The more I paint through this book, the more I learn about how to rely on thin pigment and gentle shadows when painting. Looking back at my recent paintings, I see how I tend to immediately paint with thick pigment, which is probably the biggest reason my paintings end up feeling dead or muddy. The easiest way to make lively watercolors it seems is to render the elements with simple washes of color – whether that’s a large field of color like the sky, or tiny fields of color like each individual stone on this building. Rendering the elements with a few passes gives the image a feeling of lightness and a gestural quality that I really like. 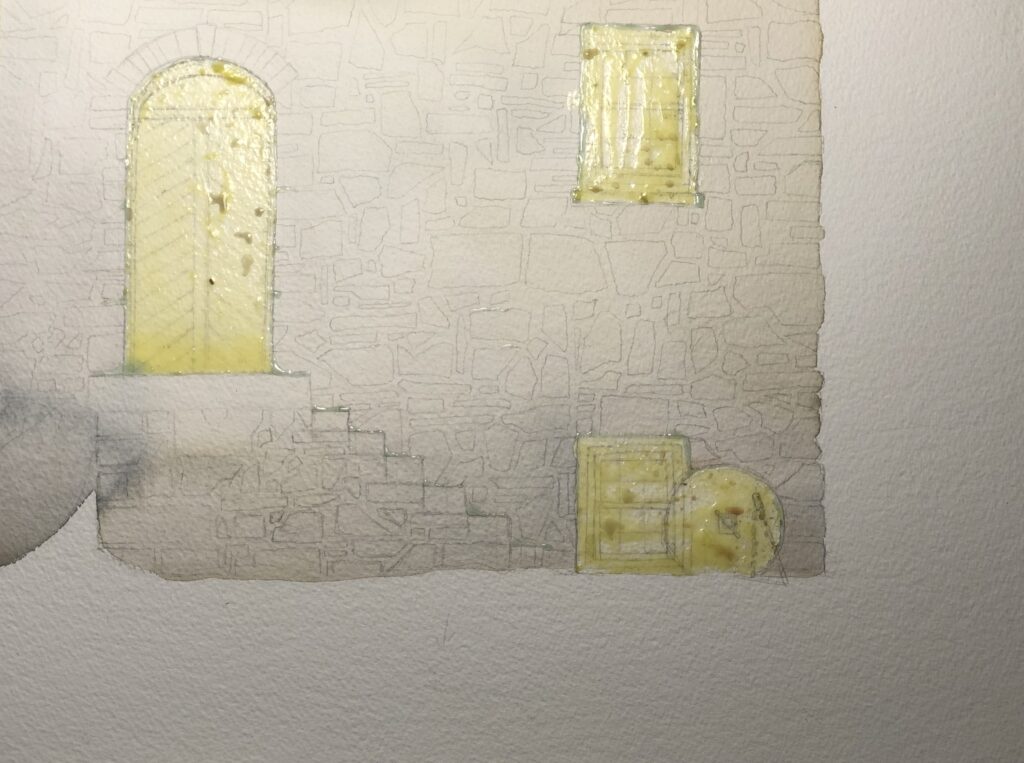 OK, so first things first. I took a LONG time to sketch this painting out. I remember how helpful a careful sketch was when I painted the Clapboard Siding exercise, so I decided to try to stick to what worked here. I know I didn’t need to paint every rock on the siding, and if I were to do this again, I probably wouldn’t. But doing this helped me avoid creating unintended patterns in the rocks. I didn’t want this to end up feeling like brickwork, it needed to be more organic than that, as if the builders had simply found stones and used them without cutting them to shape first. This is indeed how the structure was probably built, so avoiding a grid of stones was fairly important from the outset.

I was also careful to sketch out the shapes of the mullions and trim work around the doors and windows because I knew that by the time I got around to painting them, I would be pretty bored, and might have tried to shortcut the process by guessing about their construction. Just taking the time here to sketch them out correctly both committed me to that level of detail, and taught me about their construction, which reduced the guesswork and interpretation when it came time to paint.

Once the masking fluid dried, (and after the Browns won!) I painted a soft wash of color. Ray recommended a warm grey on the right, and neutral grey on the left, so that’s what I tried to do. I noticed in the book that his initial wash was barely perceptible – so I tried to make sure my pigment was super watered down at this stage. It’s hard to even tell at the end that this was done, but I do think it helps a lot in establishing a sense of the directionality of the lighting. 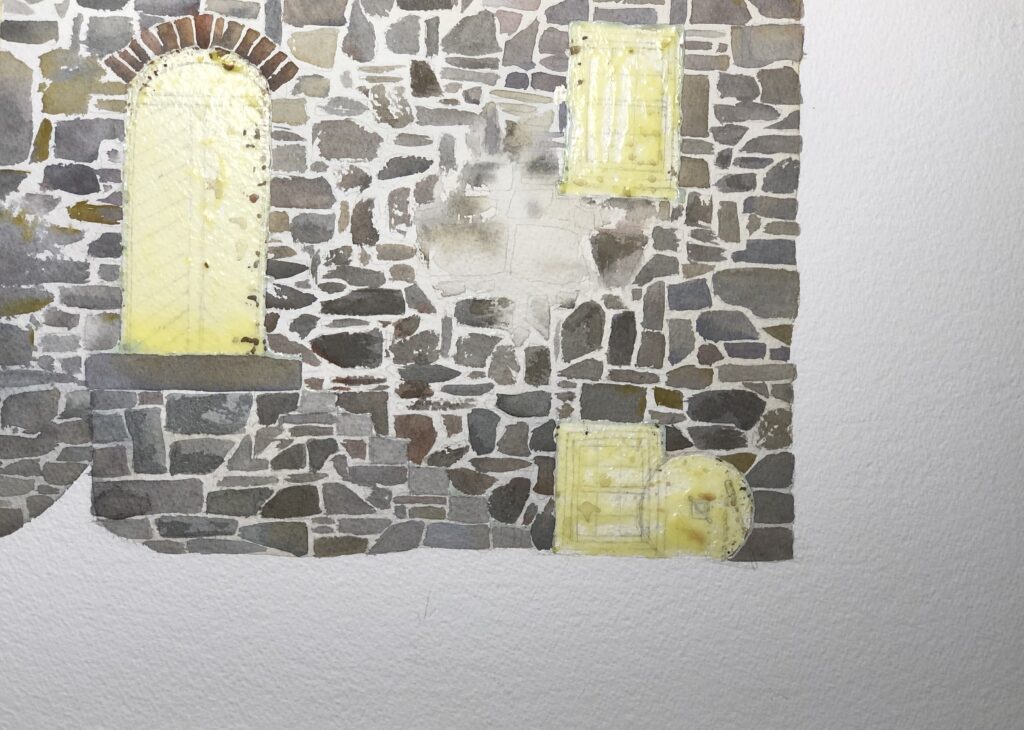 Once the initial washes dried (after I put my daughter to bed.) I started painting the individual stones. Once again, I made sure to build up a very big puddle of greys on my palette, so I wouldn’t have to worry about creating more as I painted. This is another thing I should be doing more often. When I paint, I regularly don’t have enough color mixed before I begin, and I end up having to mix more in the middle of painting. Because I have to be so fast with watercolor, I sometimes experience a soft panic when I’m mixing more color. I want to  get the color right, but I also don’t want to spend too much time on it because I worry that whatever I’ve already painted will move into the dangerzone while I’m mixing up color. I’ll end up forgetting to dry my brush, or I’ll get too much pigment in the mix, and this is a big contribution to making mud. It seems premixing plenty of pigment on the palette is an overlooked step that I need to pay closer attention to.

When I painted the stones, I tried to render each stone with one brush stroke. I then dabbed a cooler grey into the bottom left corner, and a warmer grey into the upper right hand corner. I wanted these colors to mix with themselves evenly, so it was important that these greys all be added quickly one after the other.

I also tried to make sure that some of the stones were carefully drawn, and others were rendered quickly. This gives some of the stones the appearance that they have been covered with mortar, and allows the viewer to take part in the creative process in some places by filling in details, using the carefully rendered stones as a guide.

At this stage, I wasn’t worried about a sense of depth, I was just worried about creating the shapes, and getting the colors on the page quickly. Later, I went back in with richer pigments to render shadows, which pulled the steps forward, 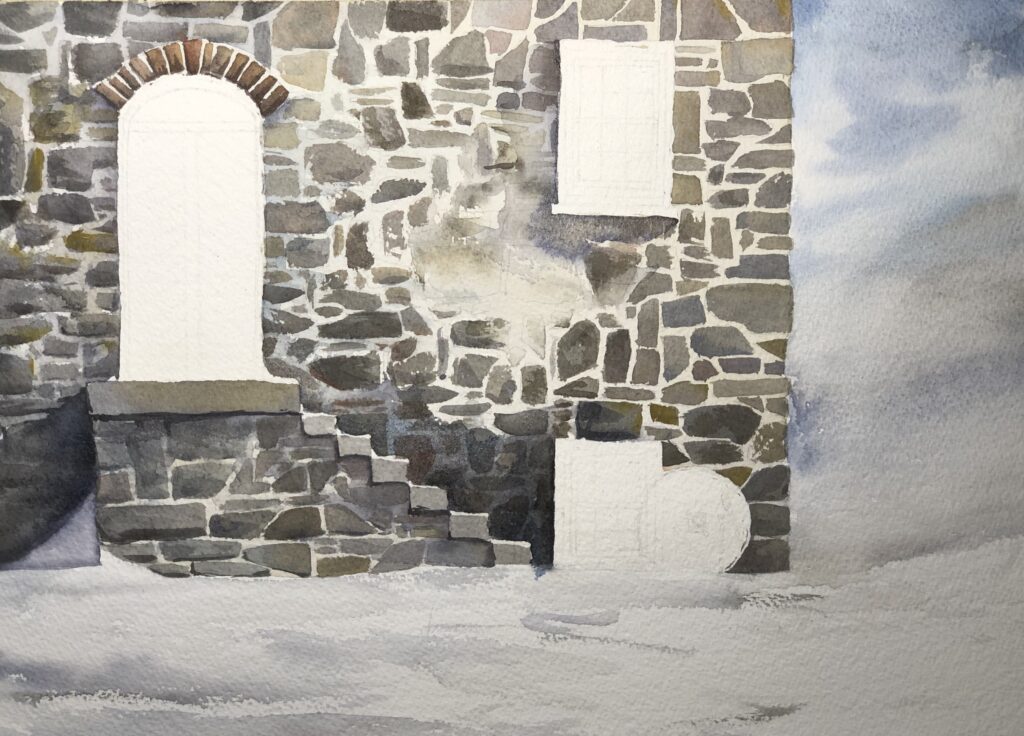 Here you can see the painting after I added some of the shadows. These were very very dark compared to the colors I had been working with up until then. I still made sure to stay away from the doors and windows, my main focus was the shadow on the left-hand side of the steps, and the shadow to the left of the lower window. Both of these shadows helped pull the steps and the window forward, giving the illusion of depth I was after.

For the snow, and background, I relied on quick ragged strokes of thin pigment. I wanted to give the impression of snow, not render it in as much detail as the field stone. This helped keep the stones as a central  focus. 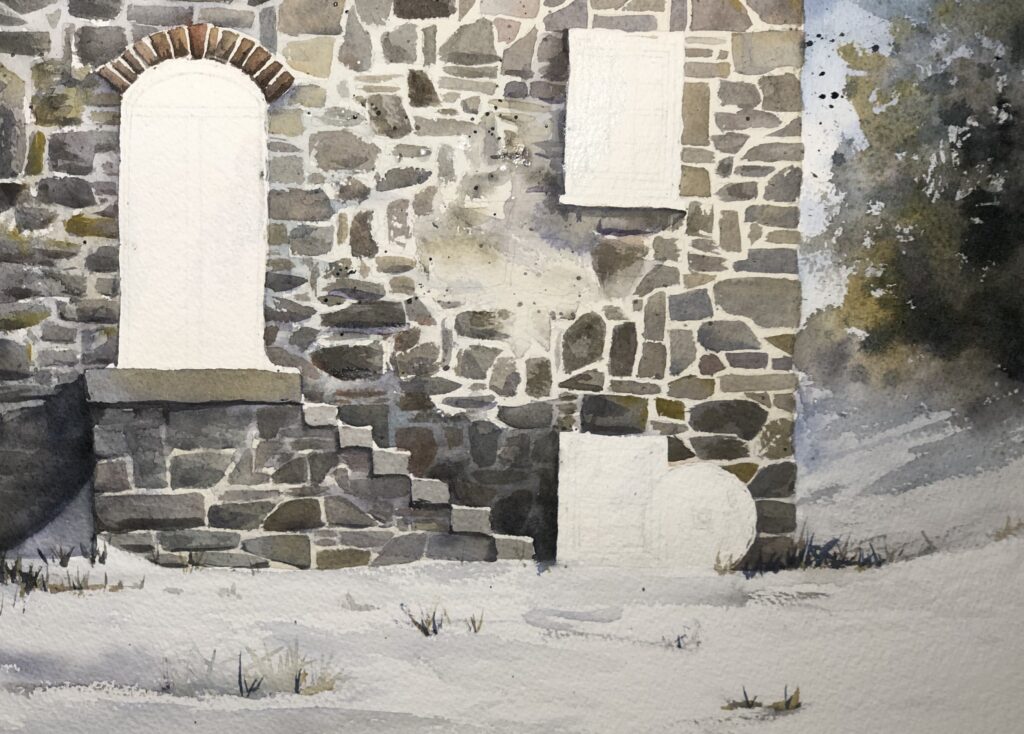 Next, I added some more detail to the trees in the distance by using fairly thick pigment on damp paper – trying to get muddled greys and browns that would suggest distant trees. Ordinarily, I would try to paint the actual shapes that I see in an image. Here, I was more concerned with creating a different sort of texture, and I wanted to darken the background in order to bring the building foward. Note how the shadows around the porch help bring it forward – and how this informs our perception of the trees. Because the shadows make the steps appear closer, we apply that same “key” to the trees, which makes the building appear closer. Normally I fade the things in the distance, and rely on a lot of soft edges in order to keep them in the background. While soft edges would have worked here, I don’t think lighter values would have worked as well – I think it would have actually flattened the composition. 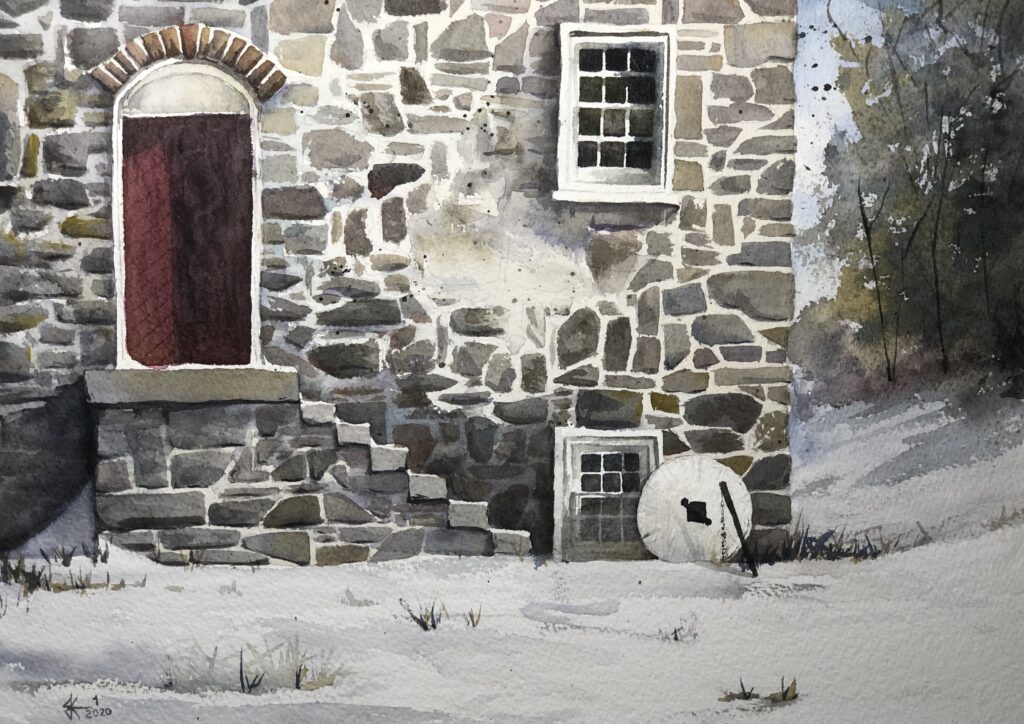 Once that was all done and dry, I painted the windows very very carefully, using just the tippity top of a pointed round brush, and very carefully painting arount the mullions. I would rather have used masking fluid here, but because the paper was already a bit ragged from removing the masking fluid, I was reluctant to cause any additional damage with another layer of masking fluid. If I had it to do over again, I would just paint carefully around the windows, and rely on making fluid for the mullions.

Once that was done I very carefully used my warm greys and my sharply pointed round to render shadows on the window trim to give the windows a sense of depth, and to allude to how they were contstructed. This step brings the windows to life – and simultaneously points out how important it is to not go too dark too fast. If I had used a thick pigment to render the field stones, these shadows would have had to be almost completely black in order to allude to the sense of depth.

I finished it off with some simple details – a few strokes for blades of grass, a barely there wash of brown and cool grey on the mill stone, and the stick with a chain – whatever that is. Then I finished by painting some lines to suggest tree trunks and branches in the back. I probably could have been more restrained here. Oh well – next time.

Once again, I’m really happy with how my exercise came out from this book, and I have a better understanding of the water level I need in order to achieve similar results on future paintings.

Oh, and you may notice how the doorway appears to be falling to the left – oops. I tried to correct this by darkening the shadow on the rocks, but it would have been more successful if I had a straighter line to begin with.

Out of everything here, my favorite part is actually the pile of snow on the left-hand side of the steps.

That’s all for now. I’ll be moving on to stucco when I paint from this book once more.