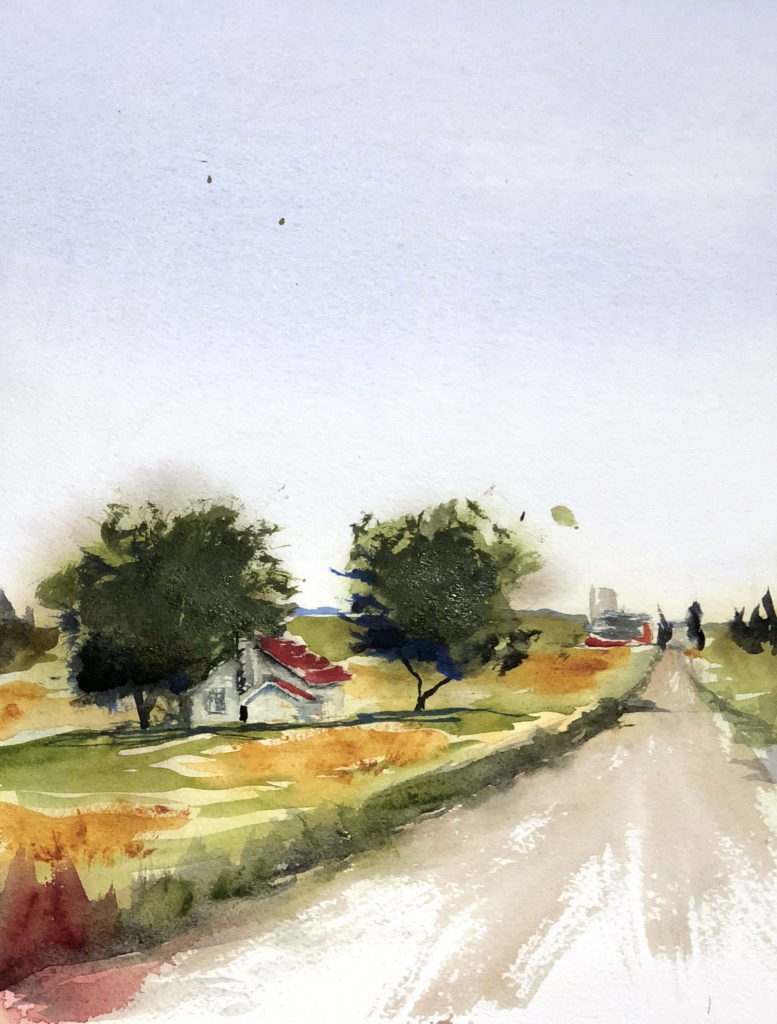 My goal today was to put down pigment in loose strokes, and then leave it alone. I painted almost the whole thing with my 120 quill in an attempt to break out of the detail mud.

I like the lost and found edge in the field, and the splash of red in thelower left corner. I also like the minimalist sky. I like the trees at the horizon, and the silo.

I started by laying down a wash over everything, because I realized that the ragged edges were actually hemming me in because I had to be careful with my wash, to not break the ragged edge. By washing all the way to the tape, I lose the style of the edge (which I like) but I gain a lot of freedom in the wash. I committed to laying the wash down without too much focus on details just to get the mood on the paper. I worried that I had ruined it at the outset because the trees took over the wash, but I think it ended up being a net benefit. I’m going to try that again.

The trees, and grass at the road side I used too much water at first. This didn’t result in the value contrast I was looking for, and went to almost straight pigment after. That was too far the other direction but I knew better than to try to fix it, so I just let the mistake exist. I didn’t go back to the grass on the road side, but I think it could use more texture.

I like the dry brush effect on the road. I really was tempted to fix my lines because they weren’t pointing to the perspective terminus (is that a word?) the way I wanted them to, but again I let the mistake exist. I see now it’s not a big deal, and fixing it would have certainly ruined the road.

Overall, it’s not where I want to be, but I’m happy to see I’m letting the mistakes go. That’s opening it up and making for a more dynamic and interesting piece. Now, I just need to get better so the confidence in the brush strokes is matched with a skilled intention, opposed to a close your eyes and hold your breath and pray it doesn’t eff it all up