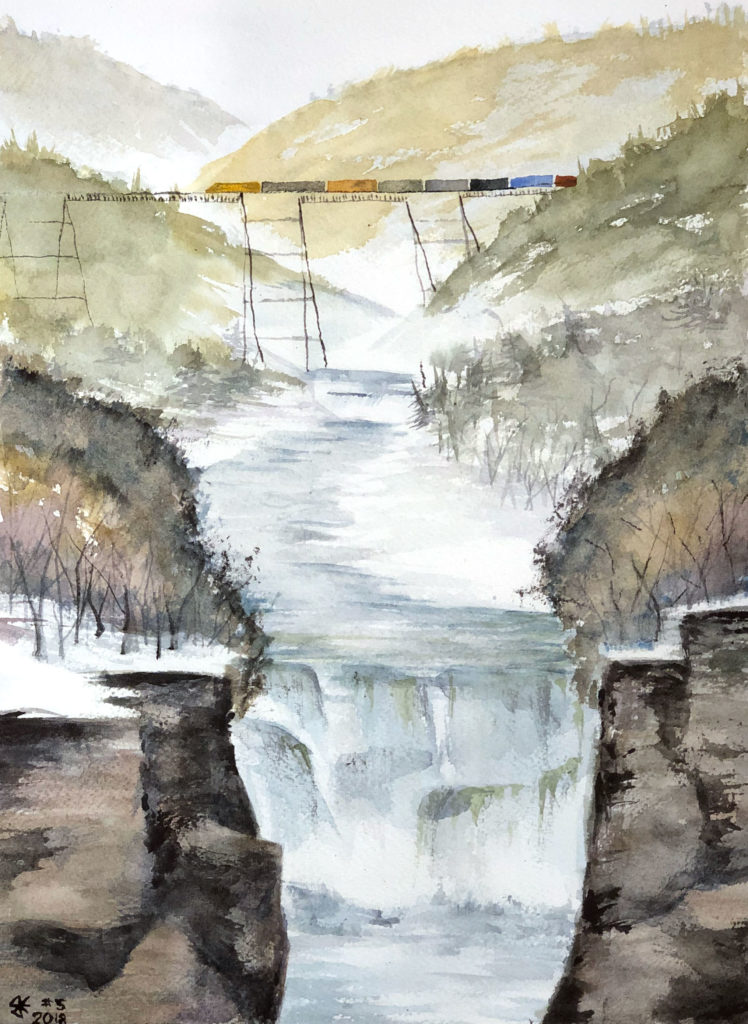 I tried to paint tonight with no masking fluid, and no sketch. (Which is probably why the bridge is falling down… oops!)

I think the lack of masking fluid forced me to be more careful with the washes, which was a good thing. Overall, this painting needs more finesse than others I have tried.

I think the value structure works better in this one than in the other versions I have done, and the curve in the river is better represented.

I don’t like the hill on the distant left, instead I think the yellower hill should stretch across from left to right.

The waterfall in the foreground is worth exploring more. I like the effect I get when using masking fluid on the waterfall, but it does feel a little gimicky to me because I am not disciplined enough with it yet. I was looking through some Renoir paintings the other day, and I like the way his soft edges capture the light. I also am inspired by Sargent’s watercolors – many of which rely on strong lines, I need to study them more – as well as Homer. (Homer’s watercolors are a goal, I know I’ll never be as skilled as he was, but he’s the moon I’m shooting for.)

The total lack of detail in the distance appears to be the right move. Keeping the river a very light value is also very helpful.

I’m still not happy with the trees in the foreground, or the cliffs. These cliffs are better than some of the others, but I am still trying to replicate that rock face I stumbled into when I painted Blue Hen Falls #1. I should practice rocks some more.

The bridge is falling down – whoops.

The left side of the bridge is supposed to go behind a cliff, but my cliff is too distant, and sending the bridge behind it throws all the perspective off. Next time, I need that midground cliff on the left to rise higher so the bridge can connect to it.

In my mind, I see light spilling around the corner at the base of the bridge. I haven’t been able to achieve that yet, but it will be my goal for the next one.