This painting might be the death of me. This subject is a very important one to me, because of how much I love going to Nimisila Reservoir. It is not at all unheard of for me to finish work and head there just to paddle around. Or, to put the kids to bed and show up just as the sun is setting. I’ll toss on a head lamp, and paddle into the water, and just paddle around, fishing a bit, or just looking through the water to see what kind of fish I can see.

The wildlife there is amazing.

There are several families of Osprey who are always swooping into the water, and at least two pairs of nesting bald eagles. On the north end of the lake (where I have the most luck fishing) the cormorants stand in the white branches of the trees that are choking from the ammonia in their voluminous shit. They stand with their crooked necks, unworried by my presence, like a hive of jaded monks. 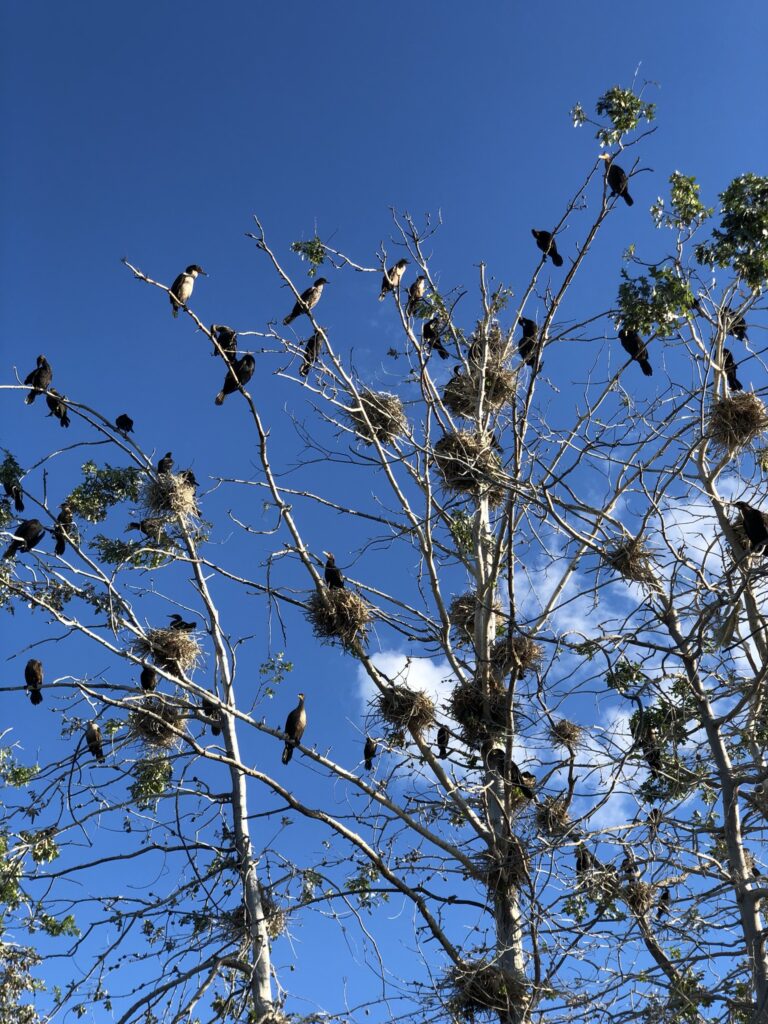 During the day I’ve seen green herons, blue herons, and woodpeckers. At dusk I’ve seen raccoons, skunks, toads, and what I’m pretty sure was a mink, maybe it was a muskrat? It was slender, and quick, and dove into the water like a furry snake with knees and elbows. At night I’ve seen opossums as big as small dogs, and I’ve been startled by more than a few beavers slapping their tails on the water. (I convinced myself one night that if Bigfoot were real, it was just throwing boulders into the water to frighten me away.)

One night I saw two huge snapping turtles mating in the water. And yes, it was as weird as it sounds. The male was on top of the female, holding her shell while I paddled around them watching like some kind of creeper. 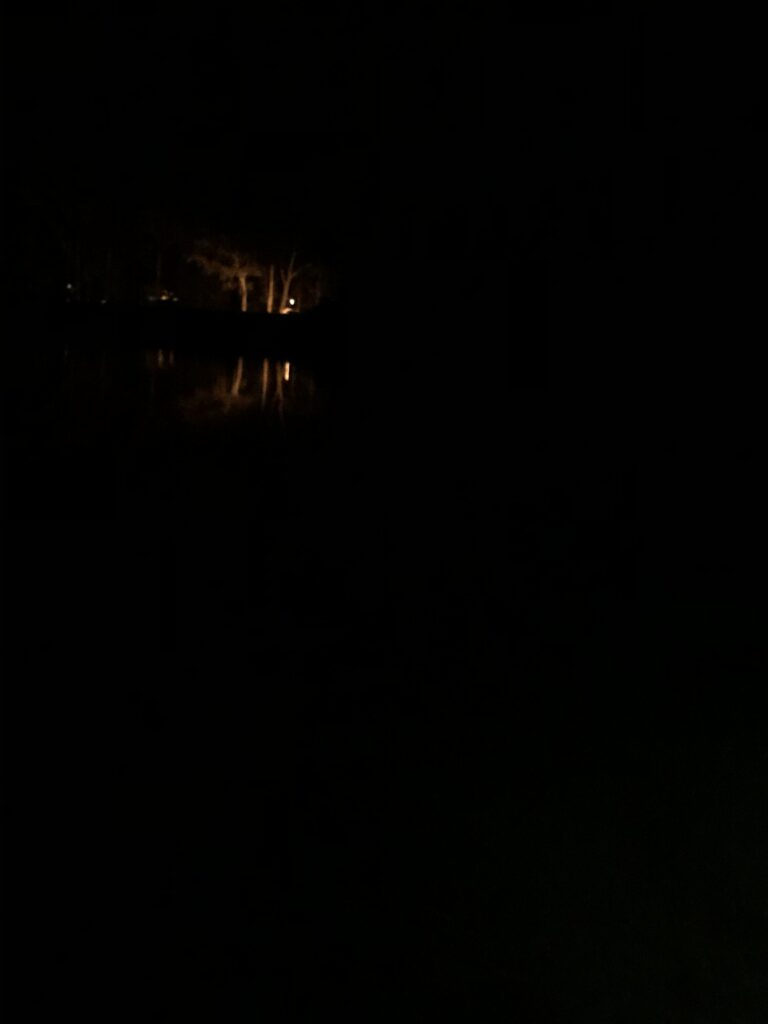 This is what happens when you try to photograph two snapping turtles having sex at two in the morning.

I’ve also seen two catfish that are literally as big as half my kayak, and a slew of bass, carp, perch, and bluegill not to mention the myriad species of darters. One of my favorites are the Brook Silversides that will come to the surface at night, and swim alongside my kayak, following the light of my headlamp.

By far my favorite nights come late in the summer, when eighty thousand Purple Martins nest in grass marshes in the middle of the reservoir. I like to paddle out at sunset, and watch them swoop over my head in dense clouds of chattering black flaps, until they swing down and haggle for scraps of grass to sleep in. As they slowly quiet down, their eighty thousand tiny beeps of mosquito breath roll out of the marsh and give rise to swirling ghosts of mist across the entire surface of the reservoir.

Just in case you think I’m making it up.

In short, this is place is special to me. So I really want to get this painting “right.” That’s why I keep trying.

Any other subject, and I probably would have abandoned it by now. But I’m committed to figuring this one out as best I can.

That brings me to number 15.

For number fifteen, I tried to take into account a lot of the things I noticed when looking back at the past attempts. Unfortunately, this didn’t result in a very good painting.

The water directly under the peninsula is stoopid™ dark.

I really like the sky. And I like the edges on the distant trees, though they are too dark. I tried to get an S-curve that would lead the eye into theimage, but it feels forced.

I like the trunks on the trees on the peninsula, but the splatter is too busy.

With all that in mind (and feeling very defeated) I decided to try another version, this time using only one color.

This one might be my favorite of the bunch so far. The water is still, and the glare works very well. (I just trusted myself this time, and dry brushed it.)

The peninsula is too close, and it’s far too dark on the left. I reduced the lily pads to simple lines, and that worked well. I have been so focused on trying to get those right in the previous compositions that they have felt forced. By deemphasizing them, they turned into a moment to be discovered instead of a point made with a sledge hammer.

Oh, and I love the way the sky transitions to yellow ochre at the horizon.

This one made me feel like I’m finally heading in the right direction.

In my previous paintings, I’ve been sheepish about adding that tree branch in the foreground. I managed to add it here successfully, largely thanks to the fact that the leaves are fairly sparse. I like the way the branch reflects in the water, but I want to improve on how I’ve rendered it.

The lily pads work well here. one again, they are just lines and dots, but they communicate what I’m after.

The base of the peninsula is too dark, but that sparse tree on the far right works well. I wonder what would happen if I rendered that in even more muted colors.

The water is too busy. I like the glitter I achieved at the horizon, but it should be glossy and smooth at the foreground, instead of jagged. I’ll need to use dry brush at the horizon, and wet in wet near the bottom.

The grass in the foreground actually works for the most part. It’s a bit muddy because I tried to render individual blades of grass with a sharp round. Later, I used my scary brush to render the grass, and that was much more successful. I think foregoing the later with the pointed brush will result in something closer to what in after here.

I like the dynamic nature of the sky, but it’s a little too ominous. I think I should face to Yellow Ochre at the horizon instead of purple, but do the rest in much the same way.

So… that’s it for now. I’ll try number 18 tonight after work.

Oh… one more thing: I noticed just now that the swoop in the sky should go the other way. Right now the diagonal is in the same direction as the near water, if it angles up and to the left instead, it would do a better job of pulling the eye through the painting. (I think.)